The button on the Zoom screen indicated that there were about 366 participants for the Eco-School class that morning last September. But in reality, about 900 students of Ateneo de Davao University Junior High School in Davao City, the Philippines, joined the online class about marine plastics, and most of them were enthusiastic.

When the lecturer, Yasmin Nabilah Mohd Fauzee, a Malaysian doctoral student at Nara Institute of Science and Technology, began the class with an interactive quiz about ASEAN, the chat box lit up with notifications as students put in their answers. As Ms Fauzee explained more about the state of marine plastic debris and plastic pollution, and gave more quizzes, the students were eager to throw in questions, comments, and answers. The class was held by the Tokyo-based ASEAN-Japan Centre (AJC), in collaboration with the Regional Knowledge Centre for Marine Plastic Debris (RKC-MPD) of ERIA, to raise awareness among youth in the ASEAN region about marine plastic. RKC-MPD mapped out and contacted potential schools in Indonesia, Malaysia, The Philippines, and Thailand, while the AJC provided the lecturers and the materials. Within September-October 2022, around 1,780 students in six schools in the four countries received the marine plastic debris classes under the Eco-School program.

The program was created in 2021 as a pilot project to implement the recommendations in AJC’s “Future Leaders’ Declaration on ASEAN-Japan Cooperation for International Marine Plastic Waste”. Launched in March 2021, the Declaration aims to adopt and present a student-initiated declaration on international marine plastic litter between Japan and the 10 ASEAN member countries. Based on the Declaration, the “ASEAN-Japan Eco School for Marine Plastic Waste Education (“Eco-School Project”)” was launched in September 2021 to implement the recommendations in Clause 18 (Education and Awareness) and Clause 24 (Youth Engagement) of the Declaration.

The Eco-School Project supports the ASEAN Regional Action Plan for Combating Marine Debris in the ASEAN Member States (2021-2025) Component III: Public Awareness, Education and Outreach. It aims to further strengthen the partnership between Japan and ASEAN through multi-generational and cross-sectoral collaborations between the youth, educational/academic sector, and governments of ASEAN member states and Japan.

The Journey of Plastics

Since its launch in 2021 until October 2022, the Eco-School Project has reached a total of around 4,426 students from Japan, Indonesia, Brunei, Malaysia, Lao PDR, Thailand, and the Philippines. The lecturers are PhD candidates from ASEAN countries who are currently studying in Japan, except for a few who study in their respective countries.

The materials taught to students ranged from the basics—what plastic is made of, why we use plastic—to the danger of single-use plastic, plastic pollution situation in each country, and how plastic flow from the land to the ocean. They were presented in a way that is attractive to young students, with a lot of pictures, videos, and were made interactive. 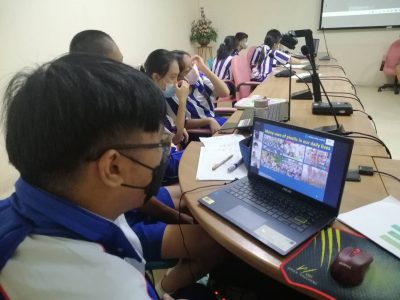 Katrina Navallo, the Programme Manager of AJC’s Research and Policy Analysis (RPA) Cluster who oversees the Eco-School Program, said students participating in the program in the past one month are coming from various levels of environmental awareness.

Meanwhile, the partial data from the high school pre-survey, 73.7% answered it is difficult for them to avoid using plastic products, but 97.8% answered they want to reduce the amount of plastic they use at home, and 54.4% strongly commit to future actions to reduce plastic waste.

“Based on the partial feedback we have received so far, the most questions came from the high school students. The questions and feedback from the high school students also tend to be a bit technical and show the intent to do more than just receive lessons, such as asking about follow-up activities and other organizations they can join that promote environment-related activities in their locales,” she said.

The feedback survey showed positive responses from the students, saying they enjoyed the class, wishing to have more of such class in the future, and asking how they can participate in activities to prevent marine plastics.

Data from ASEAN schools about whether they have followed up the program, is not yet complete, according to Katrina. But an elementary school in Japan which had participated last year have used materials from the lecture in conducting a simple research among Grade 5 students during this year’s summer break.

“They asked the students to visit a nearby body of water and investigate the presence of plastic waste in the water and surrounding area, with a set of guided questions,” Ms Navallo said.

To ensure the impact of the Eco-School, the ASEAN-Japan Centre is currently developing the “Train the Trainers” or a marine plastic waste education training program for educators.

“It aims to enable the educators to develop the knowledge to teach the subject to their students, either as part of their existing curriculum or as a one-time lecture session, similar to the current format of the Eco-school program. The trainers who will complete the training will receive follow-up (3 months later) on how they have applied the knowledge gained and ask for evidence of their teaching sessions,” said Ms Navallo.